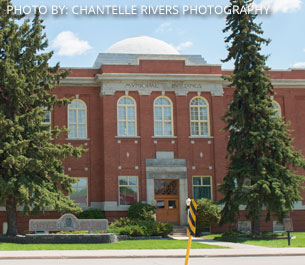 Melville is a City full of original homes, businesses and churches. This is a guide to all of the Historic buildings in Melville.

Constructed in 1912, this building was once the site of luxurious balls, and is still used for cultural events today.

Motter’s Plumbing & Heating - Ervin G. Motter was the first tradesman to set up shop in Melville in 1908.

This sturdy brick home dates back to approximately 1915 and is one of the oldest original houses in the city.

All Saint’s Anglican Church - the Anglican congregation lead by Reverend King in 1909, raised the $800 to construct their first church.
CLICK here for Map

This stucco house was built around 1920 and belonged to H.E. Ross, one of the city’s early lawyers.

This original brick house was built in 1907, it is the oldest house still standing in Melville.

Examples of two bedroom wartime houses. Built in 1947-1949 for returning veterans and their families, payments were $25/month.

Mary Immaculate Convent 1928. (Dominican Sisters) This house was built in the early 1920's

Central School - Construction began on Central Public School in 1909 on the corner of 6th and Main St. This building was later on torn down in 1973, to make way for three new buildings to cope with the overcrowding of schools.

Ukrainian Greek Orthodox Church - discussion took place as early as 1923 to build this church in Melville but construction was not complete until 1928.

St. Paul’s Lutheran Church - This is the original structure built in 1907 when the congregation was formed by Pastor A. Fricke. It was the first church erected in Melville.

What is now the Classic Inn was built in 1942 and was the Swift Egg Drying Plant.

Bowl Arena - The Princess Theatre, built in 1913 was equipped to provide fist class service and had a seating capacity of 500. In 1930, the theatre was sold and remodeled in 1953 it is still in use today as a bowl arena.

Elks Lodge - In 1914, the Merchants Bank of Canada replaced their two storey frame with this brick structure. In 1922, they merged with the Bank of Montreal and were fully equipped with safety deposit boxes and a fireproof safe. In 1970 the bank moved and the building became the Elks Lodge.

The Redgwick Block was built in 1907 and was the community’s first block.

Waverley Hotel - was built around 1915

CNR Station - This CN Station located on 1st Avenue and Main St. in Melville as built in 1908 by Carter, Hall and Adlinger Co. It follows the Type A station Style dictated by the Grand Trunk Pacific Railway Company at that time featuring a long hipgabled roof with a swept dormer at each end. The gables feature decorative timbering. Originally it housed a restaurant (The Beanery), waiting rooms, opererators, office, baggage room, and living quarters. The dormers were removed when the roof was repaired. Restoration of the Heritage building will see thier return. A meeting on January 4, 2006 at city hall centered around the future plans to turn the CN Rail Station Building into a CN Western Canada Hockey Hall of Fame.

This caboose or van as they were known, was built by the Grand Trunk Railway in 1895 and was transfeto the CNR in February, 1925. It was customary that the van would be the hotel room the railway crew would use when their assingment was completed. In Canada these cars were called "vans". In the US they were referred to as a "caboose". The caboose was completely restored in the 1980's and placed on Queen St. as a Tourist Information Center.