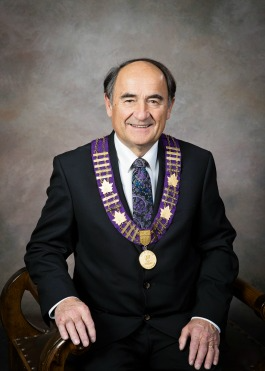 How wonderful to be enjoying the months of summer. This year July has been somewhat atypical – hot days -strong westerlies -loud night boomers. We do have weather variations in our province.

There have been a lot of very exciting events in the last 30 days. We held the Indigenous Flag raising ceremony on June 21st, despite the heavy down pour  of rain.   This event was hosted by the Yorkton Tribal Council and present, among others, were the young children from “Away We Grow” childcare. Donor’s Choice held its Annual Meeting on June 27th, distributing funds to various organizations, the result of yet another successful community campaign. The St. Peter’s Hospital Auxiliary was recognized for their committed effort in providing a multitude of services and equipment to add to patient comfort. The Auxiliary is no longer active after some 112 years of operation. Thank you, present and former members of St. Peter’s Hospital Auxiliary. The city parade and the “Movie in the Park” occurred on June 30 with July 1st Canada celebrations at Centennial Park – A great two days of events. July 2nd saw former students and staff members celebrate the 50th Anniversary of Melville Comprehensive School.

The July 9th – 10th weekend was a weekend of a lot of activity. Melville Minor Baseball hosted a 32-team baseball tournament with players from many communities in Saskatchewan as well as Manitoba. The weather was great and the campground was full of visitors. On July 9th the Melville Millionaires hosted their first ever Millionaire Alumni Night with a program that involved TSN speakers Orlesky, Staniszewski, hockey greats Ferraro and King, and Millionaire Coach Mike Rooney. It was truly great to see the large number of former Millionaire Alumni present.

Welcome to Dr. Radkhah who has joined the physician team at St. Peter’s Hospital.

Did you know that at the 1909 sports day in Melville there wasn’t a tree in sight?

With the celebration of the summer solstice, we look forward to leaving behind the drudgery of a lingering winter and the pandemic issues that plagued us for the last two and a half years.

The month of June saw a reawakening of many events and activities. June was proclaimed Parks and Recreation month and we are grateful for the efforts of our city employees who diligently maintain our beautiful city parks. Just recently our Melville Heritage Museum held an open house to usher in summer hours that visitors will be welcome. The local library hosted an evening highlighting their Indigenous Resource Centre collection to be permanently located in Melville as the result of sponsorship by the Painted Hand Casino. June 11th saw Mr. Craig Wallebeck from GX Radio receive the Lifetime Achievement Award for his many years of stellar broadcasting in our community. Mr. Wallebeck regularly reports on activities in Melville. The Pride flag was raised on June 15th in recognition of National Pride month in Canada. The Trans Canada Trail that passes through our city held its official grand opening on June 19th. A big thank you to the many volunteers, spearheaded by Wally Oucharek, for the maintenance and preservation of this multi-use trail. June 21st the Treaty 4 flag was raised in recognition of National Indigenous Peoples Day. We were honored to have a special guest at the flag raising ceremony Yorkton Tribal Chief Isabelle 0 Soup.

We congratulate the MCS High School Grads on the completion of Grade 12 and the upcoming grad recognition night on June 29th. We wish the grads all the best as they expand their interests and seek out new opportunities in the next stage of life. Thank you, parents and teachers for your committed guidance and support to the grads of 2022.

Please join us in celebrating “Canada Day” 2022. Events start on June 30th with a parade beginning at 6:30 and travelling throughout much of the city. This will be followed by a movie in the park situated on the slope next to Community Works. Friday, July 1st , citizens are invited to come to Centennial Park to enjoy the many planned activities. The celebrations will be capped off with a huge firework display.

Hats off to the Melville Regional Library who has won second place for its 2021 TD Summer Reading Program on the national level.

Did you know that Melville’s history book, The Ties That Bind was compiled in 1983 to mark the City’s 75th Anniversary?

To date it has been rather difficult to welcome spring… strong winds, low temperatures, and heavy rains have caused yard cleaning, gardening, and seeding delays. On a positive note, our city reservoir has been replenished with fresh water to the point that the overflow at the spillway has been activated.

However, despite these conditions, city projects like paving, lift station construction and the new McDonald’s restaurant are all moving forward.

The Melville Beavers, after a successful clean-up of winter debris, held their year- end wiener roast at the city reservoir. Thanks Beavers! The Melville Arts Club held its spring art show on April 30th which was, once again, well received by the community. The next weekend Sarah Schick hosted a youth art fair which consisted of a variety of different art forms, on display by her students. Great to see the community support provided to the Benjamin Circus that occurred at the Horizon Credit Union Centre on May 17. On May 28th-29th the Melville Dance Association will be presenting their annual recital “Reach Beyond the Stars.”

Many events and gatherings will occur during the month of June which brings a sense of vitality and anticipation to our city. To name a few: the city-wide garage sale June 4-5, Thrift Store Fashion Show and Tea June 4, the R.C.M.P. Musical Ride June 5, and the Trans Canada Trail Grand Opening June 19.

National Public Works Awareness Week occurred during the week of May 15-21st. Our city and community is greatly appreciative of the efforts of our city Public Works Department

Hats off to all those individuals and organizations that participated in the city-wide spring clean-up effort.

Did you know that in 1949 Melville became the first community to introduce the automatic telephone dial system into Saskatchewan – ending the party line listen-in system?

It seems that this year we are being teased into the season of spring. The longer days are certainly appreciated, the geese have returned, but it seems we still hover around the early morning minus readings. Surely we’ll be enjoying warmer days soon.

While provincial Covid-19 restrictions have been lifted, the onus lies with each of us to protect ourselves from reoccurring strains that seem to keep coming forward. However, it is nice to see many community events being scheduled.

The April 3rd, “Bring on Spring” Craft and Trade show was the first community event in our HCUC Convention Hall. This well attended event served as a great start to many more such functions at this facility. Green Shirt Day on April 7th recognized the efforts of the late Humboldt Bronco hockey player Logan Boulet in advancing organ donor awareness. The Melville Millionaires attracted some 130 young hockey players to their Spring Showcase on the weekend of April 9th.  The Melville and District Chamber held its annual meeting on April 12th with Corinne Sapara taking on the president’s role. We wish President Sapara and her Executive well in their community leadership role.

World Earth Day scheduled for April 22nd was first started by an American environmentalist and Congressman in 1970 and now is celebrated in 193 countries including Canada. In Melville we try to align clean-up activities with this date but are often subjected to weather conditions that offer a challenge. Free tipping occurred on this date as well as from May 2nd to May 7th. We encourage our citizens to assist in clean-up activities when the weather is more favorable.

In recognition of Mental Health Week May 2nd – May 8th the Melville branch of the Canadian Mental Health Association will be presenting an evening saluting the First Responders of Melville and Area on May 6th. On the week of May 15th -May 21st our city recognizes, with appreciation, National Public Works Week.

Did you know that our neighbor, Marie-Anne Day Walker-Pelletier former 40-year Chief of the Okanese First Nation, was the longest serving Chief in Canada?

As of February 14, 2022 the provincial government has announced the removal of vaccination requirements in the workplace. Our city will abide by recognized provincial government policy. In regard to the memo received we will continue to advocate that, as citizens of this province, we practice measures that will help impede virus advancement and spread. With the coming of spring and the easing of restrictions it is our community hope that brighter, better days are ahead.

On Friday, February 11, 2022 the City Mayors’ Caucus met virtually, as we have previously done during the pandemic, to discuss matters affecting our various communities. We were fortunate to hear from Minister Bennett on issues dealing with mental health and Minister Vandal on Prairie Economic Development as well as other agenda items. The City Mayors’ Caucus meets for full day meetings at least twice a year to share common concerns that relate to managing affairs related to our cities. I should note that the City Mayors’ group have had bi-monthly meetings with Minister McMorris dealing with pandemic concerns up to this date. These meetings may not continue into the future because of the easing of restrictions.

The 2021 limited census results have been issued with a more detailed report to follow. The population of our city fell by 1.5 % - not what we really wanted to hear. While we dropped in population numbers, we will continue to steadfastly promote business and community development in our city. Financially, this reduction in population does result in a reduction of funds received from different governmental levels.

Did you know that in 1907 Prime Minister Wilfred Laurier’s government declared mile “297” to be a divisional Grand Trunk Pacific Railroad trackage site?  Melville has enjoyed this status ever since.

The month of January has certainly been true to form. Unfortunately, there has been many days of minus thirty readings along with some heavy snowfalls and brisk winds. The snow we can use, but the cold and wind we can do without.

With the ever-present Covid-19 pandemic City Manager McCullough initiated a meeting of directors, department heads, and me, as Mayor, to assess the operational effects of this continuous pandemic on our city employees and our community services and operational procedures. This initiative was well received and may be a reoccurring event should present health issues persist.

While I try to recognize the many community activities that used to occur in our community it does seems that so many events have been curtailed or cancelled. In talking to people in other communities much the same applies. Caution and uncertainty dominate our actions and limits returning to normalcy.

We acknowledge the efforts of our various school divisions who are so diligently trying to attend to student academic needs and development. We recognize our health front-line workers and entire medical core who work in demanding and stressful conditions. Credit to all those organizations who through tenacity and persistence attempt to provide for youth activities.

Hats off to our city snow-clearing crews who have certainly been challenged but have been most steadfast in clearing our roadways. Hats off, as well, to the crews at Anytime Fitness and Westridge who continue construction during inclement weather.

Did you know that we allocate $35,000 to our snowplow and snow removal budget annually?