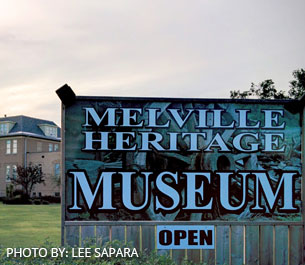 History buff's visiting Melville will certainly want to add the Melville Heritage Museum to their itinerary. The Heritage Museum is one of the oldest buildings in Melville, having been built in collegiate Gothic style of buff-coloured brick in 1913 as the Luther Academy. This building housed the Academy until 1926 when the Academy moved to Regina. At that time it became the St. Paul’s Home for Age & Orphans. The first museum board was formed in 1975 and the City of Melville declared the building a Heritage Site in 1981 with the grand opening of the Heritage Museum being held in 1983 in conjunction with the city’s 75th birthday.

The Museum seeks to portray the ethnic diversity that is found in Melville and area, and to preserve the history of early Lutheran education in our province.

The Heritage Museum presently has over 10000 artifacts with about 1000 books including textbooks in German, English, Greek, Ukrainian and Latin. The 22 rooms of exhibits span three floors of the building. Artifacts and histories of local, provincial and national interest which include Chapel, Library, Grand Trunk Pacific/CNR, Military and Sports History, over 100 original black and white framed photographs depicting Melville’s first quarter century as well as murals and a gift shop.

The Heritage Museum is located 1.3 km North of No.10 Highway overpass and has limited wheelchair access.

The station is from Duff, Saskatchewan and was built by the Grand Trunk Pacific Railroad. It is a Type "E" station, one of only 200 stations of this type constructed on the Prairies. The Railroad equipment includes: CNR caboose built in February 1957 at the Fort Rouge yards in Winnipeg from a retired boxcar. The Eastern Car Company built the boxcar in 1918. The flat car is CNR #75223 and the steam locomotive is CNR #5114. This is a "Pacific" class locomotive with a wheel arrangement of 4-6-2. It was built in August 1919 in Montreal, Quebec by Montreal Locomotive Works. A Pacific locomotive was used primarily to pull passenger trains however it could be used in freight service as required. It was a relatively light locomotive used on the secondary railroad track; ideal for the branch line of the CNR.

The majority of the exhibits contained with in the station include various pieces of communications equipment, from telegraphs, and telephones. There are also records from the Grand Trunk Railway and CNR, including employee records.

The museum became official in 1986 when the City of Melville designated it under the Heritage Act.

The Canadian National Railways van 77295 van is located by Highway 10 across from the Independent Grocery Store. The caboose or van was built by the Grand Trunk Railway in 1895. When it was built the number of this van was 90309 and got a new number when it was transferred to the Canadian National Railway in 1925. This van would serve as the hotel room or bunk house for that railway crew until their assignment was complete. The caboose was restored in the 1980’s and was placed in its current spot to be used as the Tourism Melville Office until 2006 when there was a new office built.